A first step, a cost estimate, an international perspective, and a plan for the future 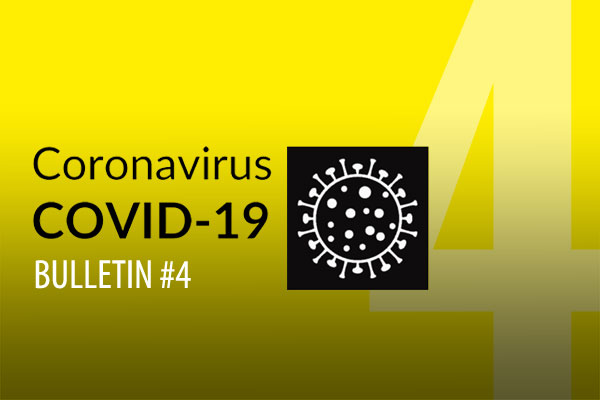 A welcome initiative but only a first step

The Irish Government’s economic response last week to Covid-19 with a €3.7 billion package was a welcome initiative in supporting tourism and hospitality businesses up and down the country who are wrestling with a staggering challenge. The wage subsidy measures, increased unemployment payments and better illness cover are important first steps to help confront the economic crisis that has befallen the country.

The Irish Tourism Industry Confederation (ITIC), representing the leading tourism stakeholders across the public and private sectors, set out a 3-point plan on March 15th outlining the urgent and immediate measures needed by Government to protect Ireland’s tourism businesses. ITIC is part of a Covid-19 emergency tourism taskforce that, along with Department officials and tourism state agency CEOs, met for the 3rd time earlier this week and was chaired by Ministers Ross and Griffin.

Business Survival, Liquidity Measures and Demand Stimulation are the basis of ITIC’s 3 point plan and represent the only viable blueprint for Ireland’s tourism industry.

Credit must be given to Government for devising their €3.7 billion economic package with such speed and Department officials are striving hard to make sure the measures work for business. Crucially though the package is scheduled for a 12-week period and the Irish tourism economy – 75% dependent on overseas visitors – will need sector-specific support for the rest of the year with little international visitation to be realistically expected in 2020.

Furthermore, additional efforts will be needed to support tourism employers as well as employees. Local authority rates remain a burning issue and these represent a significant cost for business. The current policy of a 3 month deferral is unclear and wholly inadequate to the challenge facing tourism and hospitality companies. As has happened North of the border, there must be a complete rates waiver for the remainder of 2020 if tourism businesses are to survive this crisis. ITIC welcomes Government pressure on banks and insurance companies to support business during these troubling times but much more must be done on this front to ensure financial institutions play their part in supporting industry.

It is worth noting that EU State aid rules enable Member States to help companies cope with liquidity shortages. Specifically, Article 107(2)(b) TFEU enables Member States to compensate companies for the damage directly caused by exceptional occurrences, including measures in sectors such as aviation and tourism. The Irish Government must use all flexibility within EU guidelines to support Ireland’s tourism industry, a sector that proudly claimed 20,000 individual businesses prior to Covid-19.

Based on 2019 CSO data, when overseas tourist expenditure in Ireland (excluding air and sea fares) amounted to €5.1 billion, ITIC has made an initial estimate of the cost of Covid-19 to Irish tourism. Assuming Q1 has a -60% impact (March wiped out and no Saint Patrick’s Festival), Q2 sees a -85% impact (when little international business of any serious note happens), and then slow recovery occurs in Q3 (-70%) and Q4 (-50%), the overseas earnings element of the tourism economy for 2020 could amount to as little as €1.58 billion, a Covid-19 cost to Irish tourism of €3.52 billion. When including fares paid to Irish air and sea carriers by international visitors the total cost of Covid-19 amounts to over €5 billion. 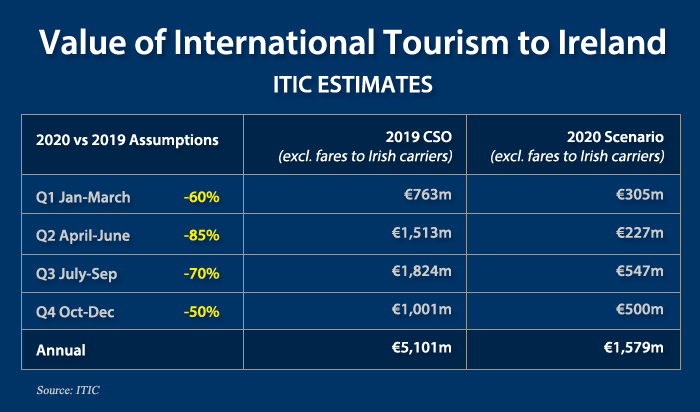 Such a cost has parallels with OECD’s recent analysis of a -45% to -75% impact on global travel and tourism. Such an exercise for Irish tourism of course has a number of significant caveats. Will Irish tourism be fully open for business this summer? Which source markets might visit? How badly impacted will the air access situation be post Covid-19? The domestic market is likely to recover faster than overseas markets but it is the latter that is the main contributor to Ireland’s tourism industry.

International connectivity, the life blood of tourism, in lock down

Covid-19 is of course not just having a devastating impact on Irish tourism but is reeking havoc throughout the global travel and tourism sector. The number of global air departures scheduled for this week (commencing March 29th) is less than half the level planned at the start of the year. The increase in flight cancellations, while across numerous country markets , is especially marked across Western Europe where international connectivity was cut by more than two thirds last week.

Global air service connectivity has been significantly reduced as the rapid spread of Covid-19 continues resulting in a rapid decline in passenger demand with lock downs in many countries together with the imposition of travel restrictions around the world. The USA, Canada, Australia, Russia, Mexico, New Zealand, and United Arab Emirates are amongst countries to totally ban the entry of foreign nationals.

The current situation has seen airline fleets grounded as carriers attempt to mitigate the impact of the current pandemic by reducing costs and cutting non-critical expenditure. The majority of European airlines have made heavy cuts with several, including EasyJet and Stobart, temporarily suspending operations. Most airline schedule cuts are in place for at least April with a few not anticipating any significant change up to end May. According to airport representative council ACI Europe, airports across Europe are likely to see a loss of over 700 million passengers and €14 billion in revenues by the end of April.

The International Air Transport Association (IATA), the trade association of the world’s airlines, has calculated that airlines will see a 38% fall in global demand and a $252 billion loss of passenger revenue 44% down on 2019 – should the severe travel restrictions last for up to three months. The fall in demand is forecast to be deepest in the second quarter ending June 30 with a 71% drop in revenue. The latest analysis IATA has been asking governments to provide a lifeline of financial support, with some airline failures and further consolidation within the sector inevitable. To-date several countries have committed to financial relief, including Singapore, China, Hong Kong, Australia, Brazil, New Zealand, Qatar, Colombia, Sweden, Denmark, Norway, and Finland, together consideration of support including a $58 billion package in the US and significant support measures from the European Central Bank.

The figures speak for themselves. The air transport industry is in its deepest crisis ever. One bright spot is now appearing in China, where Covid-19 began its spread, as Chinese authorities are now beginning to lift restrictions and domestic flights are beginning to ramp up to almost three times the level at the bottom of the cycle back in the middle of February.

However, there is no certainty as to when air service connectivity will be able to resume as airlines continue to monitor the situation based on regulations and demand.

The travel and tourism industry is resilient and has historically returned to a growth trend following external shocks such as 9/11, SARS, and the global financial crisis of 2008. The economic impact of the pandemic will be a primary determinant of demand for international travel and tourism if and when the crisis subsides and consumers are free to travel. The impact will undoubtedly also have a psychological effect of prospective travellers and could well result in disruptive changes to established patterns of social behaviour, including travel. Post SARS research suggested that tourist were more predisposed to travel to countries which experienced no or a low incidence of the disease and an increase in health considerations in selecting the type and venue for leisure travel.

International tourism worldwide is expected to fall of between 20-30% this year representing a loss of between US$300-450 billion, or almost one third of the US$ 1.5 trillion generated in 2019, according to the latest projections from the UN World Tourism Organisation (UNWTO). Putting this into context it would mean that between five and seven years’ worth of growth will be lost to Covid-19. By comparison international tourism declined by 4% in 2009 on the back of the global economic crisis, while the SARS outbreak led to a decline of just 0.4% in 2003. Travel and tourism is one of the hardest hit sectors within the global economy by the pandemic as flights, cruises, hotels, meetings and conventions, attractions and a web of supporting businesses struggle to survive the current unprecedented situation.

An Irish Tourism Recovery Taskforce with industry at its heart

Although very difficult, there is an onus on Ireland’s tourism industry to start planning for the recovery phase. Conversations are ongoing with Ministers, Department officials and Agencies but one thing is certain: industry must be at the heart of any recovery taskforce. We can not go back to business as usual. ITIC has laid down much of the groundwork with its roadmap for the sector that was published 2 years ago: “Tourism: An Industry Strategy for Growth to 2025”. Although the world has changed with Covid-19 many of the enabling factors articulated within the Strategy remain as valid as ever including promoting access, competitiveness, the importance of research, enhanced marketing and product development. ITIC believe that a collaborative approach is needed now more than ever to commence the process of rebuild and recovery of Irish tourism.

A high-level tri-partite taskforce of industry, Agencies and Department will be needed as a the vehicle and mechanism to relaunch Irish tourism and provide jobs, economic growth, and exchequer returns.