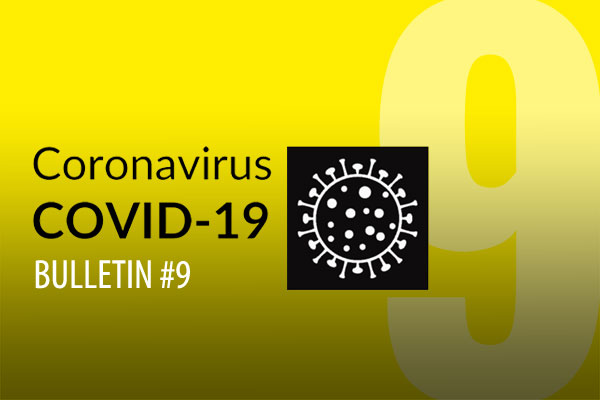 A Ray of Hope

Against a background of rising infection rates across Europe and the Americas, the re-imposition of lockdowns, economic uncertainty, and falling travel demand, last week’s good news on a vaccine breakthrough is a cause for some cautious optimism. The preliminary results from Pfizer and Moderna trials suggest a Covid-19 vaccine may be going to regulators for emergency approval by the end of the year if all goes well. Encouragingly up to 10 other vaccines are in late stage trials giving genuine hope that vaccinations will be available widely to the public at some point during 2021.

On the travel front forecasts of a return to pre-COVID levels of international travel have been progressively pushed out, with IATA pointing to 2024/25, while the EUROCONTROL’s latest forecast range from the most optimistic based on the mass availability of a vaccine of a return to 2019 levels by 2024 with the most pessimistic scenario being an eight year recovery to 2029. International tourism is facing a long road to recovery, despite a strong consumer desire to travel tempered by heath safety concerns, changing consumer values, travel patterns and behaviour. In the short term a restart of discretionary travel requires a reliable pre-flight testing and a robust tracking regime.

In an Irish context as tourism businesses struggle to survive and reduce cash burn, following a devastating 2020 leading into 2021, further government financial supports is likely to be needed if a significant number of business failures and increased unemployment is to be avoided. Failure to protect tourism’s business infrastructure and expertise will result in a diminished visitor offering and will be a serious blow to Ireland’s competitiveness in the international marketplace. 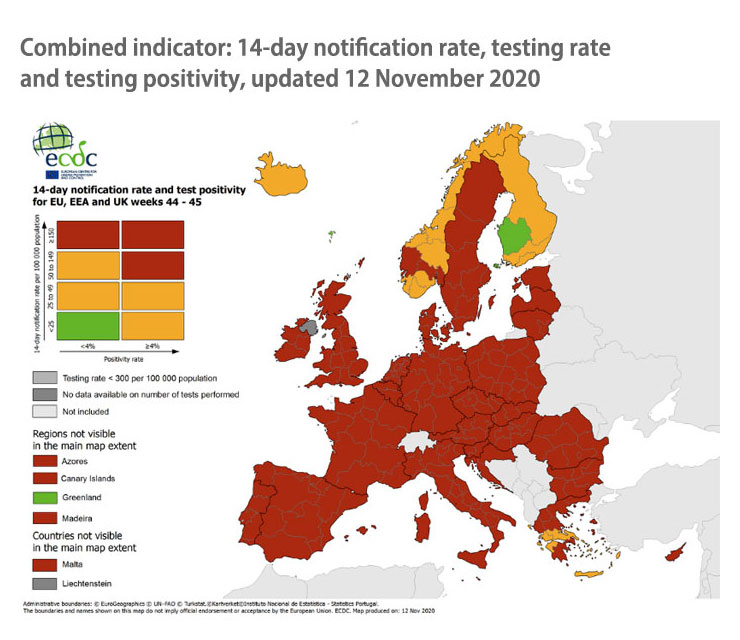 Ireland has adopted the EU approach with effect from midnight November 08, 2020, based on the metrics of a 14 day COVID-19 incidence rate and a test positivity measure, as follows:

The new system is intended to bring greater consistency and transparency across Europe. Currently Greenland is the only area within the green categorisation, while parts of Greece, Norway and Finland are in the orange category. A fortnightly review and update process has been put in place.

The EU proposal is that passengers travelling on certain essential functions are not advised to restrict movements. This includes essential workers, journeys for imperative business or family reasons (for example, attending a funeral), essential medical reasons for travel.

Dublin, Cork and Shannon airports have all recently provided testing facilities to help hasten the safe commencement of international travel.

The latest good news that a vaccine developed by Pfizer jointly with BioNTech was found to be more than 90 percent effective in preventing COVID-19 infections is most welcome. Earlier this week Moderna reported preliminary results of their vaccine which showed a 95% efficacy rate. While news of positive results from this and other late-stage vaccine trials is encouraging, independent scientists have cautioned against hyping early results before long-term safety and efficacy data has been collected. From a tourism perspective the impact of the development of an effective vaccine is only half the solution and is not necessarily an immediate panacea. The challenges of upscaling the manufacture and global distribution of a vaccine are gigantic – IATA estimate that the equivalent of 8,000 Boeing 747s will be need to transport the vaccine in temperature controlled conditions to deliver mass vaccination.

With large numbers of passengers unlikely to be vaccinated before mid-2021 at the earliest, widespread and affordable testing and tracing is the key in the short-to-medium term to restoring passenger confidence and convincing governments to lift quarantines and other travel restrictions.

It seems as if tests are becoming crucial to jump-starting demand for travel. That’s why we’ve seen, and continue to see, a flurry of announcements globally by airlines and airports regarding pre-and post-flight programmes of COVID-19 testing. Lowering the costs of testing is also crucial to expanding passenger confidence and stimulating travel.

Demand for air travel, despite a short lived lift over the summer, has now dramatically deteriorated reflecting the spike in COVID-19 infection rates and the consequent re-imposition of restrictive lockdowns across many countries.

The financial cost to the airline and travel industry has been devastating. European airlines, with the biggest capacity drop and fastest cash burn, have suffered the impact of COVID-19 more heavily than airlines in other world regions. The top four European airline groups – IAG, Lufthansa, Air France-KLM and Ryanair – have reported aggregate losses of €3.9 billion for Q3 July-September, compared to a profit of €5.2bn in 2019, which represented almost two thirds of the combined annual profit.

Ireland is fortunate in having two airlines heavily invested in the market and provides a distinct competitive advantage for tourism providing a speedy reinstatement of services as soon as the virus in under control and consumer sentiment recovers. Foreign airlines, other than those serving a strong hub network, as is in the past will be slow to reinstate services to/from Ireland.

Ryanair, the market leader in delivering short haul visitors to Ireland, achieved a small operating profit for the quarter, although not enough to offset the losses in the preceding quarter. The airline reported a net loss of €197m for the six months April through September on an 80% drop in passengers. Ryanair has the strongest liquidity position among the top European airlines with €4.5bn cash in hand at September 30. A strong balance sheet together with its lowest cost base, means Ryanair is best positioned to emerge a winner from the crisis to fund low fares, grow its network and expand its fleet including taking delivery of 30 new Boeing 737 aircraft. The airline is expecting to bounce back in summer 2021, operating 80% capacity.

Tourism and related businesses have been hardest hit of any sector in the economy, with an effective bar on trading due to closure orders, quarantine requirements and travel restrictions.

Accommodation and Food Service Activities is the sector with the highest number of people in receipt of the Pandemic Unemployment Payment (PUP) on November 03 with 98,233 recipients, followed by Wholesale and Retail Trade (51,921), while almost 11,400 employees in the Arts, entertainment and recreation are also currently availing of PUP supports. Based on the official data, it is conservatively projected that up to 150,000 people across the wider range of businesses dependent on tourism are currently in receipt of Government wage support. The sector is currently under a closure order, at a cost to the State in the region of €40m per week. It is evident from the official data that tourism related businesses have not seen a level of recovery apparent in other sectors when compared to the peak impact of the initial lockdown in early May. The negative impact has been most severe in the greater Dublin area, and the Western Seaboard, counties from Waterford to Donegal, all key tourism destinations and employers.

The survival measures put in place by Government to secure businesses and employment in the sector have been broadly welcomed by the industry. Measures in Budget 2021 including the reduced Vat rate, the financial scheme of up to €5,000 per week to support enterprises most affected by Covid restrictions, revised PUP allowances and the €55 million business continuity fund to be administered by Fáilte Ireland are all positive steps to help tourism and hospitality businesses survive this existential crisis. However, as the industry is facing into another period of at least six months of few if any international tourist arrivals, a programme of supports over the next 12 months will be critical to avoid further business failures and redundancies. Businesses require some degree of certainty moving from the low winter season into summer 2021 to ensure that the industry can maintain its experienced and talented workforce – a key asset of the Ireland tourism experience – and thereby secure its future.

The United Kingdom having formally exited the European Union last January, has been negotiating on a future trading relationship to take effect when the transition period ends on December 31, 2020. Significant differences are reported to remain in a number of areas including the so called level playing field, or regulatory convergence, and fisheries. Failure to reach agreement will result in quotas and tariffs on trade between the UK and the EU. Of particular concern to Ireland is to ensure that the no hard border agreement, legally entered into by both parties, is protected.

While the free movement of travel between Britain and Ireland is assured, a ‘no deal’ Brexit would have a number of impacts on the sector which would damage Ireland’ competitiveness in the international tourism marketplace. Cost of inputs from Britain would increase, while any easing of state aid rules, employment conditions and other business compliances on the part of the UK could competitively disadvantage Ireland’s tourism offering. Continuation of joint, or reciprocal, visa arrangements currently in place on a pilot basis facilitating ease of travel between Britain and Ireland for visitors from third countries, could also be at risk post Brexit.

Even if a deal is reached later this month it is likely that there will be some disruption in trade between the UK and EU member states from January 01, as systems needed to implement requirements of the Brexit divorce deal are unlikely to be in place.

After almost nine months of few, if any, tourist arrivals the prospect of an influx of visitors over the Christmas holiday season appears to be in doubt. Almost 800,000 visitors arrived in Ireland last December, with the bulk of trips arriving for the Christmas holiday. The profile of visitors at this time of the year is primarily those visiting family and friends for the festive season, including large numbers of Irish people living abroad returning home.

The latter part of December is typically a very busy period for Irish air and seaports with inbound visitors accounting for upwards of 60% of the month’s total 1.3m passenger throughput in 2019. The Christmas holiday travel is an important boost of revenue in the low season for carriers, airports, and other tourism related businesses. Last year Ireland earned an estimated €400m from inbound visitors over the month including €100m in fares paid to Irish carriers. In what is traditionally a busy month for air and sea carriers, December last year saw 779,000 inbound visitors as referenced in the graphic below.