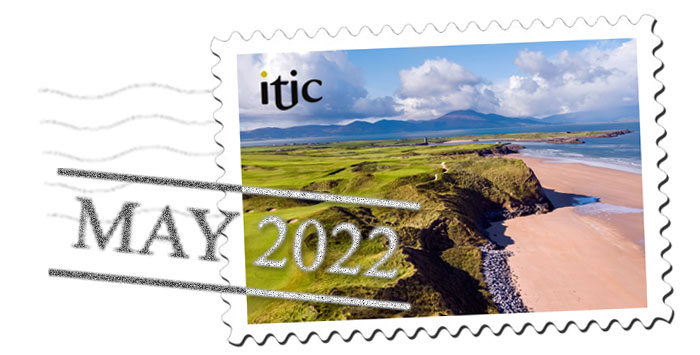 Recovery on an Upward Trajectory

This month’s Tourism Postcard provides in-depth analysis of ITIC’s revised scenarios, including why full recovery to 2019 levels won’t be achieved for 4 years.

As always, your comments are most welcome by emailing info@itic.ie.

Demand for international travel has been on an upward trajectory for the past 6 months. However, the impact of geopolitical factors and the ongoing pandemic combine to create a very volatile environment for the travel industry. The conflict in Ukraine shows little signs of an early resolution; energy prices are at a 14 year high; consumers and businesses face supply chain disruptions and increasing inflationary pressures. The impact of this cocktail on macroeconomic growth, consumer confidence and demand for international travel is difficult to predict.

The first quarter of 2022 has seen a marked uptick in demand, particularly evident within Europe, as consumers return to international travel in increasing numbers. The removal of most travel related restrictions has released an underlying pent-up demand boosted by significant household savings. Consumers have taken to the air in increasing numbers over the early months with short haul trips dominating. Low cost airlines have been to the fore in restoring capacity attracting an increased share of the VFR and leisure markets. Anecdotal evidence would suggest that business travel has been slower to return. Outside of Europe the picture has been more mixed, with transatlantic travel slower to return, while recovery in Asia-Pacific source markets is lagging the rest of the world.

The European airport network posted its best monthly performance so far since the start of the pandemic as passenger traffic in March reached 66% of the corresponding month in 2019. Total passenger numbers for Q1 2022 stand at 60% of 2019 volume. More recently, Ryanair reported flying 14.2 million passengers in April, compared to 13.5 million in April 2019, achieving a load factor above 90% for the first time since the beginning of the COVID-19 pandemic as traffic rose sharply during the Easter holiday period.

Passenger movements to and from Ireland over the first three months of the year reached 63% of the volume over the corresponding period in 2019. Based on an analysis of carriers’ routes and schedules, together with reported observation of passenger flows, it would appear that the rate of recovery of Irish outbound demand outpaced that of overseas visitor arrivals over the period. VFR visits to reunite with family and friends was a key driver of inbound demand as travel restrictions eased.

As port surveys conducted by the CSO have yet to resume, having been suspended due to COVID, no data is currently available on the volume and composition of visitor traffic to Ireland. ITIC’s monthly DASHBOARD was guiding visitor arrivals in Q1 as close to 1.2 million or just below 60% of the pre pandemic level over the same period in 2019.

The invasion of Ukraine by Russia on February 24th resulted in a new set of challenges for an industry already reeling from the impact of COVID-19 on travel and tourism. The conflict, although primarily a humanitarian disaster, is affecting the tourism sector in a number of ways, most notably higher energy and food costs, and a significant impact on consumer confidence and disposable incomes.

While Ireland is geographically distanced from the conflict, and attracts relatively few Russian and Ukrainian visitors, the sector is facing higher costs and supply chain disruptions as a direct consequence. These negative impacts are in addition to existing labour shortages across all sectors of the travel and tourism industry. In addition, the humanitarian efforts to accommodate those fleeing from the conflict has reduced Ireland’s stock of guest accommodation, which could potentially limit Ireland’s capacity to meet demand in certain areas over the peak months.

The latest forecasts from the International Monetary Fund (IMF) reflect the economic damage from the conflict will contribute to a significant slowdown in global growth in 2022 and add to inflation, especially hitting fuel and food prices. The cost of travel and holidays are forecast to rise.

Beyond 2023, global growth is forecast to decline to about 3.3% over the medium term. War-induced commodity price increases and broadening price pressures have led to 2022 inflation projections of 5.7% in advanced economies and 8.7% in emerging market and developing economies—1.8 and 2.8 percentage points higher than projected last January. 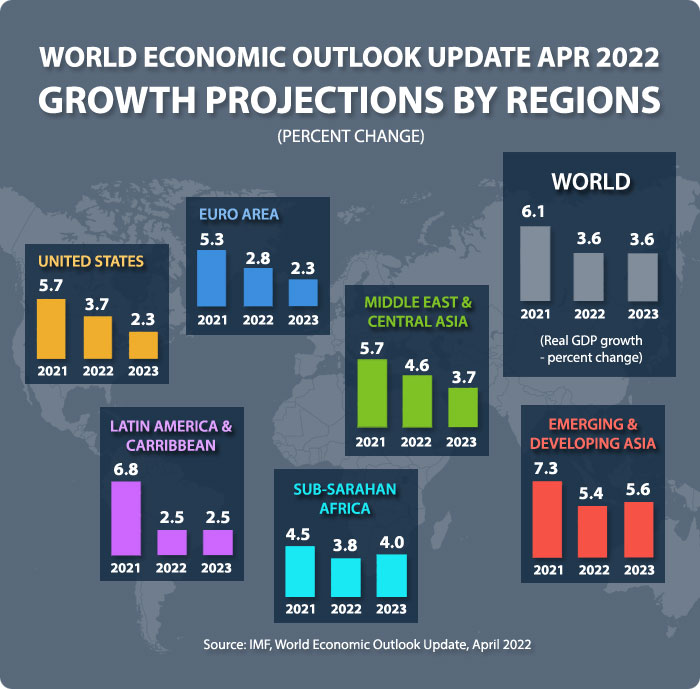 In line with market expectations Central Banks around the globe have begun to react to the burgeoning inflation pressures. Within the past week the US Federal Reserve increased its benchmark interest rate by a half a percentage point, the biggest move since 2000, while the Bank of England raised the rate to one percent, a 13 year high. While the ECB expects inflationary pressure to ease – headline inflation in the euro zone hit 7.5% in April, with fuel and food accounting for 3.5 percentage points – the ongoing war and threats to gas flows could see interest rates rising by the summer.

International air passenger numbers across the globe are expected to reach 69% of 2019 levels in 2022, increasing to 82% in 2023 and 92% in 2024 reaching pre-pandemic levels by 2025. This forecast from early February predates the Ukraine crisis, an upgrade on previous near to mid- term projections, reflects the progressive relaxation or elimination of travel restrictions in many markets. The projected recovery points to more rapid recovery in the major North Atlantic and intra-European markets, with Asia-Pacific recovery lagging.

Latest projections forecast the number of flights to recover to 89% of pre-pandemic levels this year. The ‘base scenario, predicts steady growth between April and peak summer, reaching 89% of 2019 traffic by August, with this gently rising to 92% in the closing months of the year. However, the outlook is qualified by a number of risks which would see the outlook slide to the ‘low scenario’ of traffic reaching just above 80% for most months from June onwards. 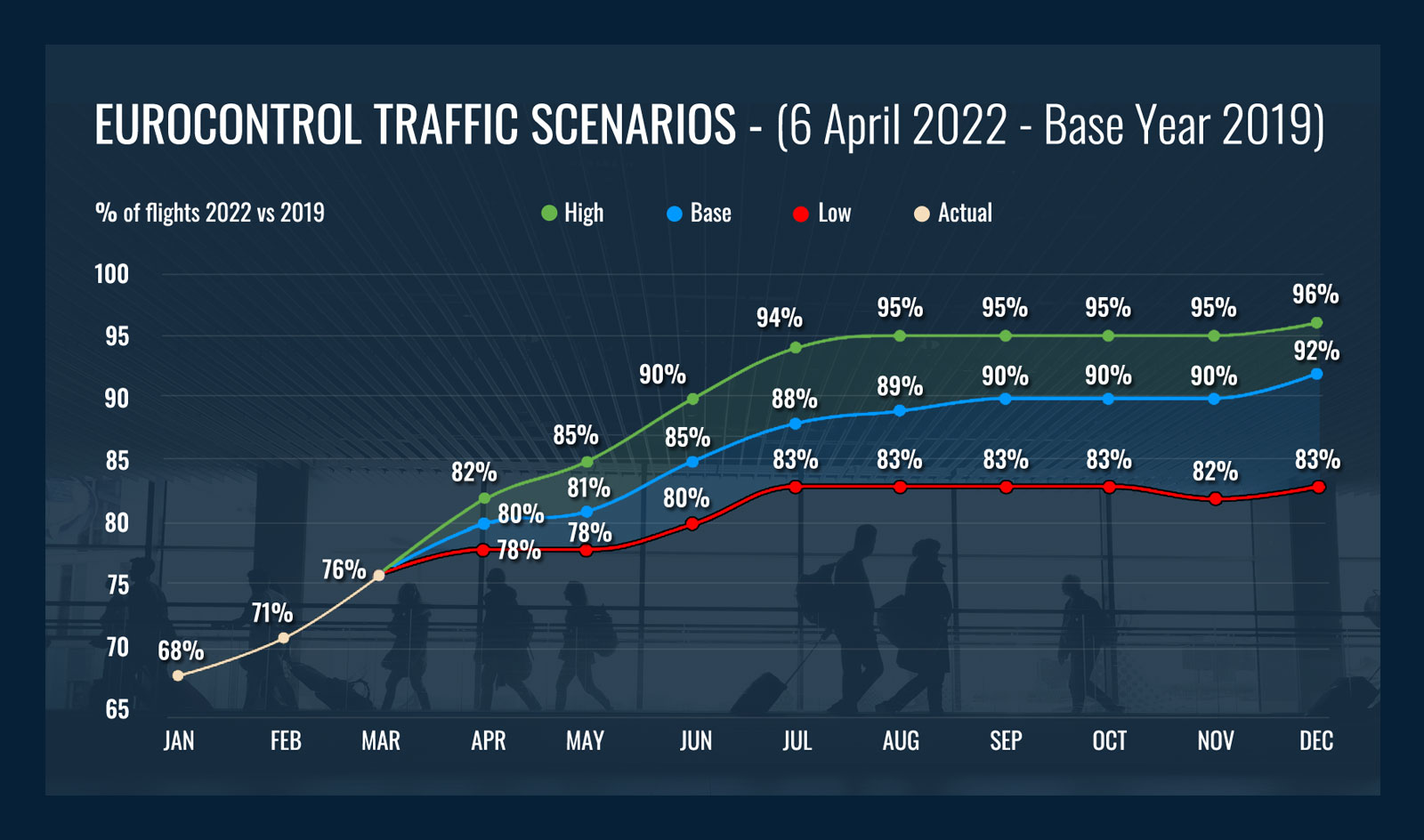 The most likely outcome (Base scenario) projects 2022 full year traffic to reach 68% of pre-pandemic levels, the most optimistic outcome set at 80% while the pessimistic low outcome would be 61%. Full recovery is not expected before 2025. Actual traffic over the first quarter of the year, compared to the corresponding month in 2019, recorded levels at -51% in January, with passenger throughput in February and March recovering to – 39% and -34% respectively. 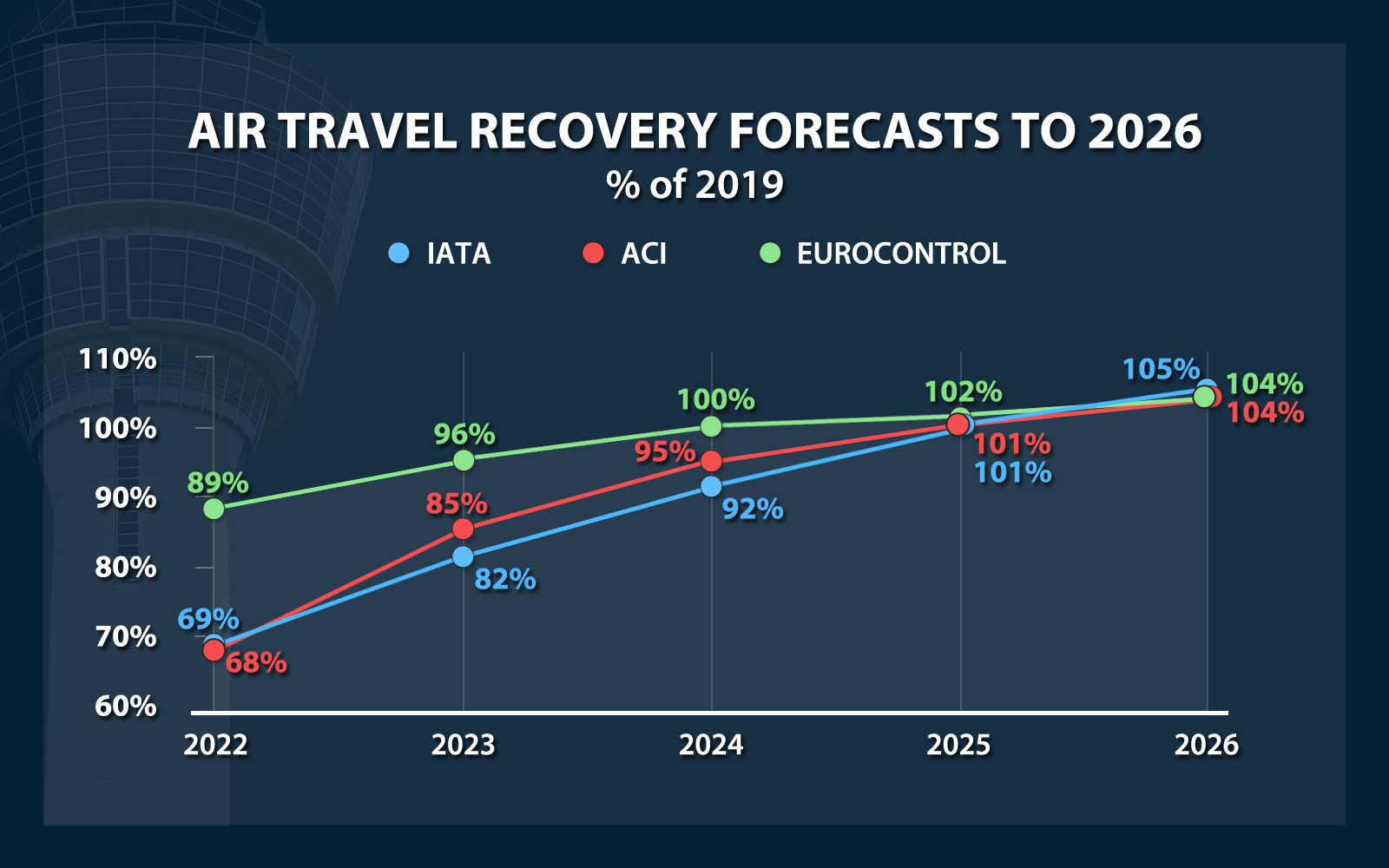 Scenarios published in January 2022 pointed to global international travel for the year reaching 50% of 2019 levels, with intra-European travel recovering at a faster pace. More recently the organisation has indicated that the projections are subject to revision in the light of evolving health, geopolitical and economic factors.

The global travel and tourism sectors are projected to bounce back to pre-pandemic levels in 2023 growing at a rate that will outpace global GDP growth, according to the latest report from the WTTC. (April 21, 2022).

Inbound visits projected to reach 52% of pre-pandemic (2019) volumes and 59% of value. The year is forecast to see a return to close to half the volume or pre-pandemic visitors over the summer, increasing to two thirds by year end.

Recent research reports that the desire across Europe for intra-European travel remains strong, despite the ongoing Russia-Ukraine conflict and rising cost of living. Over half of respondents (56%) plan to visit another European country between April and September, with Mediterranean destinations growing in popularity. Travel intentions increase with age, rising from 69% among Gen Z (18-24 years old) to 83% among baby boomers (over 54 years old). While concerns around COVID have diminished, consistent health precautions for travel remain essential.

Conclusion: Mainland Europe is expected to be Ireland’s best inbound tourism prospect for 2022. Good available airlift and competitive prices, led by Ryanair. The composition of demand by source market may be markedly different from past years with Northern European source markets slower to recover. However, the threat of broadening impact of conflict in Ukraine and inflationary pressure on consumer sentiment is ever present. 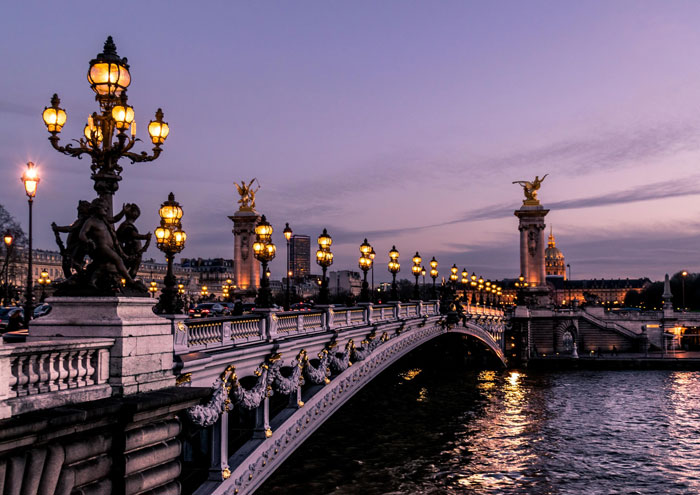 Connectivity: Capacity on offer over the summer season is at 94% of the 2019 level, with peak July/August capacity currently scheduled at 90% of pre pandemic level.

Connectivity: Summer season airlift down at least 5% on 2019, while ferry capacity largely unchanged.

Conclusion: Q1 particularly weak. While VFR demand is expected to recover speedily to pre-pandemic levels, the economic pressures on households and consumer sentiment present a particular challenge for Ireland in competing for outbound short breaks and summer holidays.

Connectivity: Summer season airline capacity is significantly down on summer 2019. Capacity on routes via the Middle East is ramping back up, while services from China including Hong Kong have been withdrawn.

Conclusion: Traffic from these markets will be almost exclusively VFR in the near term, with resumption of tourist traffic from developing markets in Asia-Pacific region at least two years away.

Recovery is projected to pick up pace as the year progresses, in line with the access capacity currently scheduled to operate over the summer season. ITIC estimates indicate that Q1 arrivals were down 42% on the same period in 2019.

Visitor arrivals projected to reach 67% of 2019 levels – an estimated 6.5 million visitors. The scenario projects a moderate monthly pace of recovery on scheduled access capacity but delivering a lower load factor.

A more rapid rate of recovery, based on high level of uptake of peak summer access capacity, could see an increase on the projected level of visitors this year. A key determinant improving on the recovery of revenue earnings will be the rate of recovery of the North American market.

A number of key variables, including the impact of the war in Ukraine and the extent to which rising costs will affect consumer sentiment and the impact of the potential resurgence of COVID in Autumn/Winter will shape the ongoing performance over the year. Clearly a deterioration of geopolitical and economic conditions, or capacity constraints within Ireland, would challenge the realisation of the projected recovery.

A return to pre-pandemic tourist volumes by 2025/26

The medium term outlook could see the return to pre-pandemic levels of tourist arrivals by 2025/26. This base scenario projects a recovery path which would see modest but steady growth following projected recovery in 2022.

A return to 2019 volume levels could be achieved earlier than 2025 based on a particular boost in 2023 with stronger than currently expected recovery from long haul markets, coupled with steady growth across short haul markets.

Medium range forecasting is challenging and complex in the current global environment. Obviously, any prolongation of the war, and its impact on the global economy and international travel demand, would undermine the above scenario projections.

We use cookies to ensure that we give you the best experience on our website. If you continue to use this site we will assume that you are happy with it.OkPrivacy Policy